Filipino Boxers in the 1930s: Idolized Heroes for The Filipino Bachelor Society 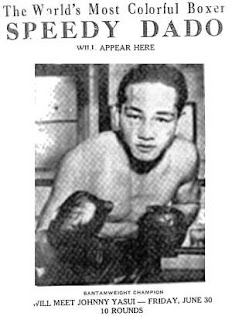 Decades before the #1 pound-for-pound boxer, Manny Pacquiao, exploded onto the U.S. boxing scene, Filipino Boxers were defending their national titles as boxing champions in the 1930s. In 1931, Diosdado Posadas a.k.a. "Speedy Dado" or "Brown Doll" was declared Bantamweight and Flyweight Champion. In 1935, Benjamin Gan a.k.a. "Small Montana" or "Filipino Flash" was proclaimed American Flyweight Champion, and at the end of the decade, Ceferino Garcia a.k.a. the Bolo Puncher became 1939 American Middleweight Champion. Just as millions of Filipinos in the U.S. vigilantly watch the Pacman's epic fights in crowded bars or massive Filipino gatherings, Filipino immigrant workers in the 30s fanatically followed these Filipino boxing champions in mainstream and Filipino newspapers; some would even travel hundreds of miles to cheer them on live (Fajardo, 456). The Filipino boxing champion was not simply a symbol of pride for the Philippines, but also a champion for the oppressed Filipino bachelor society in the States.

In the midst of racial discrimination, where even in boxing rings crowd members would yell out, "Kill that Monkey!" Filipino immigrant workers could resist racist efforts that sought to dehumanize and oppress them. Asian-American studies scholar, Kale Fajardo, simply states they could, "feel good about being Filipino men, have fun with their friends, brothers, and comrades, and literally have a champion working for and representing them" (Fajardo, 456). Filipino 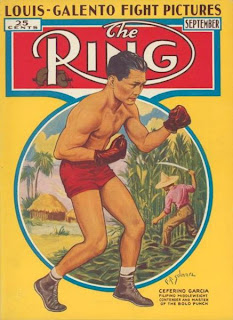 workers possessed few things to feel good about in the 1930s. They were underpaid and exploited for their labor, and they were violently discriminated against during anti-Filipino hate crimes like the Watsonville Riots. However, at boxing matches Filipino bachelors could finally "feel good about being Filipino men" for Filipino boxers were fighting in public matches in the U.S. and beating both international and American boxers. For example, legendary Filipino boxers like Ceferino Garcia won 102 matches and had 67 Knockouts. He not only won the World Middleweight championship but successfully defended the title three times against the best boxers in the world. Even though the Filipino immigrant worker was continuously oppressed, he could rise from oppression through the successes of his boxing heroes.

As a predominant bachelor society, socially constructed by the demands of white America, the most gratifying means of rising out of oppression was by reclaiming masculine identity. Since labor recruiters would primarily hire young Filipino men based on assumptions that they would be the most effective labor, Filipino men were usually void of the companionship of Filipina women. Also, Filipino men were prohibited from marrying women outside of their race because of anti-miscegenation laws. Moreover, Filipino immigrants who did not work as farmers, were typically domestic workers which was a normative practice for females. Thus, when Fajardo states that Filipino male workers can feel good about being a Filipino men it carries so much weight for the Filipino Bachelor Society in the 1930s. 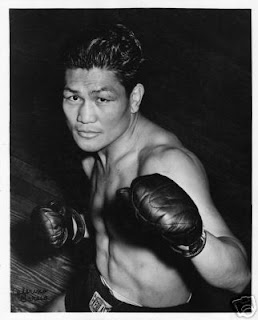 Given very little agency, Filipino male workers found avenues to move out of their restrictive lives. Through the exploration of cultural figures/objects like Filipino boxing champions, McIntosh suits, or Yo-Yos we can better understand how the Filipino bachelor society formed an identity of confident masculine fighters, continually battling against the social norms that seek to oppress them.

http://en.wikipedia.org/wiki/Ceferino_Garcia
Posted by Filipino-Americans at 12:18 AM