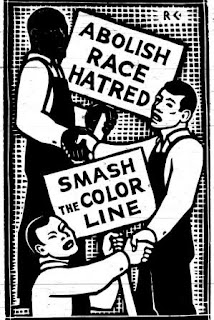 After WWI, Filipinos were heavily imported into the U.S. as labor workers. Many of these Filipino immigrants worked in either the agricultural sectors throughout California or within the cannery industries throughout Seattle and Alaska. Filipino men dominated almost the enter population of the Fil-Am workforce due to the immigration restrictions placed upon Filipina women. By 1930, Filipinos made up about 15 percent of the California's farm laborers. The Filipino men who worked during the 1930s worked in what was a bachelor society-- this enabled the Filipino laborer to travel cheaply and easily throughout the U.S. without any familial ties. 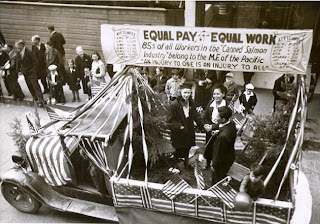 In addition to the limited women, Filipino workers were deprived of equal pay, working opportunities, and social desires of equality. Thus, Filipino farm-and-cannery-worker immigrants were living a "Social Death." The inability for Filipinos to assimilate into American society coerces Philippine immigrants to live a "Social Death" which is similar to what African Americans had experienced. Americans desired Filipinos to live in terms of supplying capitalism's labor demands. However, Americans expected Filipinos to remain invisible within society. Intermarriage, higher education, and employment advancements were some of the deprivations that Filipinos experienced during the 1930s. 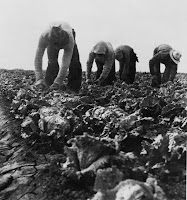 hat their wages and working conditions be improved through the development of unions. Organized in 1933, the Cannery Worker's and Farm Labor Unions played a significant role in the development of Fil-Am activism and organization.

A major display of Fil-Am activism can be seen in the 1934-1936 Salinas Lettuce Strikes. Filipino lettuce workers organized the Filipino Labor Union (FLU) and demanded for better working conditions and union recognition through strikes. (The AFL also participated in the strikes.) Both FLU and AFLs' strikes were successfully the first time and were able to set a negotiation time and date with the owners and shippers of the lettuce industry.

What is unveiled about California's history is that during the negotiation amongst owners, shippers, and laborers, vigilantes broke down the strikes by burning down Filipino labor camps. The strike efforts were dismissed and forgotten. Furthermore, in 1936, lettuce owners hired 3000 vigilantes to beat the laborers when they refused to work under the owner's poor conditions and contract.

Despite the fact that Filipinos ended up brutally injured from their signs of protest, the Salinas Lettuce Strike was a stepping stone for labor movements after. The strike served as a mark for Filipino activism and organization regarding racial justice and equality.

The Struggles in California. Farm Workers Website. http://www.farmworkers.org/strugcal.html
Posted by Filipino-Americans at 10:21 PM